Purpose: Evaluate corneal endothelium by means of specular microscopy exam in patients with Keratoconus, before and after Cornealring® corneal intrastromal ring surgery.
Methods: One hundred and two eyes of 67 patients, aged between 12 and 45, with the average age of 27.31 ± 8.15 years, 30 females and 37 males, were selected to be submitted to the implant of Cornealring® corneal ring segments in pre- and post-surgery (six months after the procedure) in the External Diseases and Cornea Ward of the Instituto Panamericano da Visão.
Results: Of the 102 eyes treated, only those that received two rings of equal thickness up to 250 μ showed statistical significance between the initial and final mean number of endothelial cells (P = 0.008), a decrease of 10.1% in the mean coefficient of variation (P = 0.003), and a 9.75% decrease in initial and final hexagonal cell counts. The other eyes receiving rings of other thicknesses showed no statistically significant differences between the mean initial and final SM examinations.
Conclusion: A longer segment is necessary for the confirmation or not of the alterations found in this study, particularly regarding the thickness of the ring used, because with the new technologies and the improvement in the result of deep lamellar transplantation, the decrease in the cell count might represent a problem in the indication of this procedure following thick corneal ring implants.

Keratoconus is a degenerative condition of the cornea characterized by a progressive thinning and bowing of the central cornea and the inferior-central portion. It is usually present bilaterally but can be asymmetrical. 1 Keratoconus is common in young individuals of working age. Its evolution and bilaterality cause gradual deterioration of vision and require different methods to correct the ametropia. Patients with keratoconus do not always need a cornea transplant but often have difficulty in adapting to contact lenses.2,3 In most patients with unilateral keratoconus who are followed for long periods, the signs and symptoms of disease eventually appear in the contralateral eye.4 Since the 1940s, several researchers have struggled to stabilize corneal ectasia to avoid transplantation. Good results have recently been obtained with implantation of an intrastromal corneal ring,5 which is a reversible method and preserves the normal structure of the cornea, without causing removal of corneal tissue.6 Initial evaluations with these implants showed no tissue reaction; the polymethylmethacrylate material used may be considered inert.7 However, the use of Cornealring® needs detailed study as far as the health of the endothelial mosaic is concerned, since its internal diameter is 4.7 mm, larger than 4.4 mm of the traditional triangular segments (14% increase).

This prospective, comparative, randomized interventionist study included patients who were admitted to the Service of Cornea and External Diseases, Department of Medicine, Federal University of Goiás (UFG) – Centre for Excellence in Ophthalmology (CEROF) after the protocol was reviewed and approved by the Ethics Committee for Research. Informed consent was obtained from patients after the possible consequences of the study were thoroughly explained; for minors under age 18 years, permission was obtained from parents or guardians. The research followed the tenets of the Declaration of Helsinki. One hundred and two eyes of 30 female and 37 malepatients, aged 12 to 45 years (average age, 27.31 ± 8.15 years), received implants of Ferrara ring segments®. The corneal endothelium was assessed before and six months after the procedure with a non-contact specular microscope (SM). The surgery involved was the mechanical implantation of intracorneal ring segments in the steepest meridian of the cornea by the same surgeon. Specular microscopy examinations (Konan Noncon Robo SP 8000) were performed with the patient sitting and obtaining the endothelial cell of the central cornea. The reproducibility of the device used was satisfactory and proved.8 The study included patients with keratoconus confirmed by clinical and laboratory tests with at least one of the following criteria:

Patients who had any of the following were excluded:

Data were stored and structured in Microsoft Excel for further analysis using the Statistical Package for Social Sciences (SPSS) software for Windows version 15.0. We used χ2 to check for significant differences based on sex, age, and side of the eye. The Kolmogorov- Smirnov test was used to verify the existence or not of normal distribution in the initial and final SM examinations.
Because we confirmed that the data have normal distribution, the Student t test for paired data was used to determine whether a significant difference existed between the total number of cells (SM initial and final), by age and by the thickness of the ring. Analysis of variance was used to compare the cell counts using SM of a particular age and thickness of the ring and also to compare the final SM results at the specific ages and thickness of the ring.

All surgeries were performed using the same surgical technique under topical anesthesia, after instillation of 1% ropivacaine hydrochloride (AstraZeneca® 1%). Surgery to implant the Ferrara ring segments® lasted 15 minutes on average. The optical zone of 5.0 mm in the cornea was marked with methylene blue. A radial incision of 0.8 mm in length was made in the axis of the steepest corneal topography based on preoperative examination and the optical zone of 5.0 mm with a diamond knife, double-sided (Ferrara Ophthalmics, Belo Horizonte, Brazil) was used for a cut of 80% of the caliper of that location. Thus, the ring segments were implanted in the flattest meridian to flatten the cornea in the steepest opposite meridian. The patient was directed to instill topical moxifloxacin (Vigamox®, Alcon Laboratories of Brazil, São Paulo, Brazil) four times a day for two weeks, dexamethasone 1 mg/mL (Maxidex®, Alcon Laboratories of Brazil) four times daily for two weeks; and hypromellose associated ith dextran 70 (Oftane®, Alcon Laboratories of Brazil) four times daily for four weeks, with continued use allowed if necessary. Oral analgesic medication was also prescribed for pain. Reexaminations were scheduled for 1, 10, 30, 60, and 180 days after surgery. 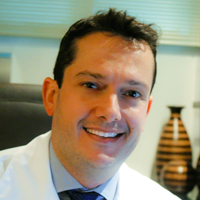